SIAE, one of the largest rights management companies founded in 1882, launches 4 Million NFTs on Algorand representing rights of nearly 100,000 creators.

Blockchain technology arose to fulfill the promise of the genesis and transfer of digital native value in a disintermediated, secure, decentralized, and scalable way. Billions of people on the planet would have the possibility of transacting without borders or barriers within a unique global distributed computational infrastructure that cancels out the need for trusted third parties in between.

As well as the exchange of digital information in the Internet era relies on Communication Protocols, the exchange of digital value relies on Consensus Protocols: combining distributed computation, cryptography, and game theory into a mathematical equilibrium the Consensus Protocols are the engines that power Blockchains, keeping the history of digital value unique, consistent and tamper-proof within a single distributed data ledger on a global scale.

Blockchains' technological performances depend on their Consensus Protocols. At the beginning of this technological journey, the so-called Proof of Work (PoW) consensus protocols powered the first generation of Blockchains, with the merit of showing the existence of digital native value but at the same time facing the limitation of their own foundation: running a planetary computational battle one against the other just to validate the next block of data takes a lot of time, with an unacceptable waste of energy. In fact, like "Proof of Work" suggests itself, showing off a personal commitment in the ecosystem through the allocation of computational and energetic resources is at the core of this consensus mechanism. However, Blockchains that run on PoW fail in fulfilling the promise of scalability, decentralisation, transaction speed, and costs ending up relying on energetically inefficient centralised computational farms.

Our planet Earth can no longer afford unsustainable technologies.

Here is where Algorand steps in thanks to the brilliant work of Prof. Silvio Micali, a new orchestration of state-of-art distributed computation, cryptography, and game theory turned the original blockchains' aspirations into the brand new Algorand Pure Proof of Stake (PPoS) consensus protocol.

Claiming sustainability of Proof of Stake (PoS) protocols against Proof of Work is far too easy. In this article I want to push Algorand’s sustainability claim even further, comparing the PPoS with other PoS, to give evidence to a stronger claim: Algorand does not trade sustainability for security, for scalability nor for decentralization!

Is the Pure Proof of Stake energetically sustainable? Let’s try to properly frame this question in order to propose a rough estimation of PPoS energy consumption and a carbon footprint.

Since the estimation of the carbon footprint strictly depends on power generation scenarios and the local degree of renewables sources, I would rather address first another critical metrics: the Finalized Transaction Energy per Validator, that is the average amount of energy spent by a validator to finalize a single transaction and append it to the common distributed ledger.

I want to emphasize that referring to finalized transactions in the definition of such a metric is not just a mere subtlety of terminology. Proof of Work consensus protocols, in fact, are prone to “soft forks”. When this, unfortunately, happens these blockchains split into branches representing temporary inconsistent multiple sources of truth within the same ecosystem. While the miners keep working on that chains, providing their respective hash rate and wasting electrical power, just one single chain is going to survive over time, according to the principle of “the longest chain”: the chain on which the greatest amount of computational work has been done will keep growing, leading all the others to an impasse. The probability of soft forks is not neglectable in PoW protocols, therefore transactions in PoW blockchain are commonly considered “final” only when a 6 blocks depth is reached. The whole amount of energy spent in validating transactions belonging to “orphan chains” is completely useless, moreover, all the energy wasted on these transactions must be spent again, until they end up being appended to the longest chain. This makes PoW even more inefficient, leading some of the biggest PoW blockchains to have energy footprints that rival small countries.

I propose here an estimation of Finalized Transaction Energy per Validator that relies on very rough assumptions and its purpose, rather than a rigorous analytical calculation, has to be intended as a reasonable baseline to support discussions on Algorand’s energetic efficiency with reasonable data evaluated within a coherent hypothesis frame.

This set of hypotheses let us “linearize the estimation” and came up with a constant Finalized Transaction Energy per Validator.

Since Algorand has no way to determine which kind of hardware hosts each Validator’s Node in the network, it is reasonable to assume that rational Validators would tend to choose the most efficient hardware capable of running the node process while ensuring full capacity TPS (e.g. a Raspberry Pi 4). 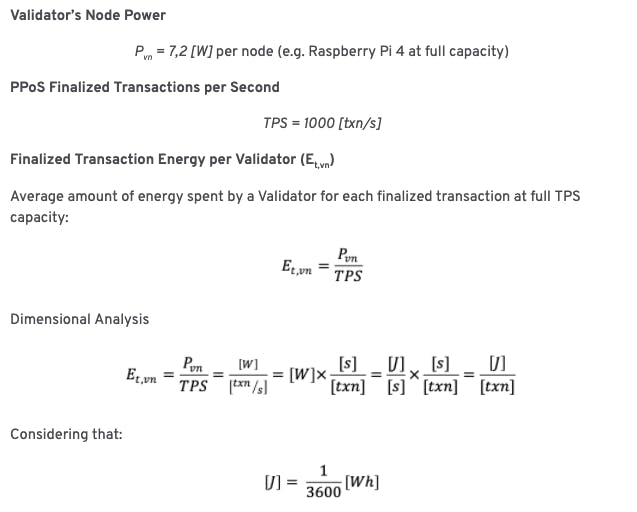 We can conclude that, on average and presuming full blocks, for “consumer” Validator’s Nodes (e.g. Raspberry Pi 4):

Claiming sustainability of Pure Proof of Stake against Proof of Work is not hard, let’s compare Pure PoS against other PoS, where decentralization became a key factor. Consensus Protocols such as Delegated PoS could easily claim, for example, that a network of 21 validators has low energy consumption, which is right, but the real challenge is being able to achieve sustainability without trading it for decentralization!

Algorand performs excellently in terms of power consumption per Validator: Pure Proof of Stake is sustainable by design when it comes to decentralization: as a result of the definition of Finalized Transaction Energy per Validator $$E_{t,vn}$$ metric, we have evidence of the fact that finalizing a transaction on the Algorand network is so efficient for Validators that decentralizing Algorand’s consensus is not at odds with sustainability. Under the hypothesis, the amount of energy spent by the whole Algorand network for each finalized transaction grows linearly with PPoS degree of decentralization, with a really low slope of growth:

Algorand is committed to improving PPoS performances over time, without sacrificing decentralization. This means that overall TPS improvements will not imply drastic changes in terms of hardware power consumption. Although higher TPS could require a slightly higher CPU load, we will assume that Validator’s hardware power consumption will rise by 25% and 50% as a consequence of x10 and x46 TPS growth respectively. Under this hypothesis, keeping the same rate of network decentralization (4k Validators), PPoS performance improvements in terms of TPS will make Finalized Transaction Energy $$E_{t}$$ even lower. 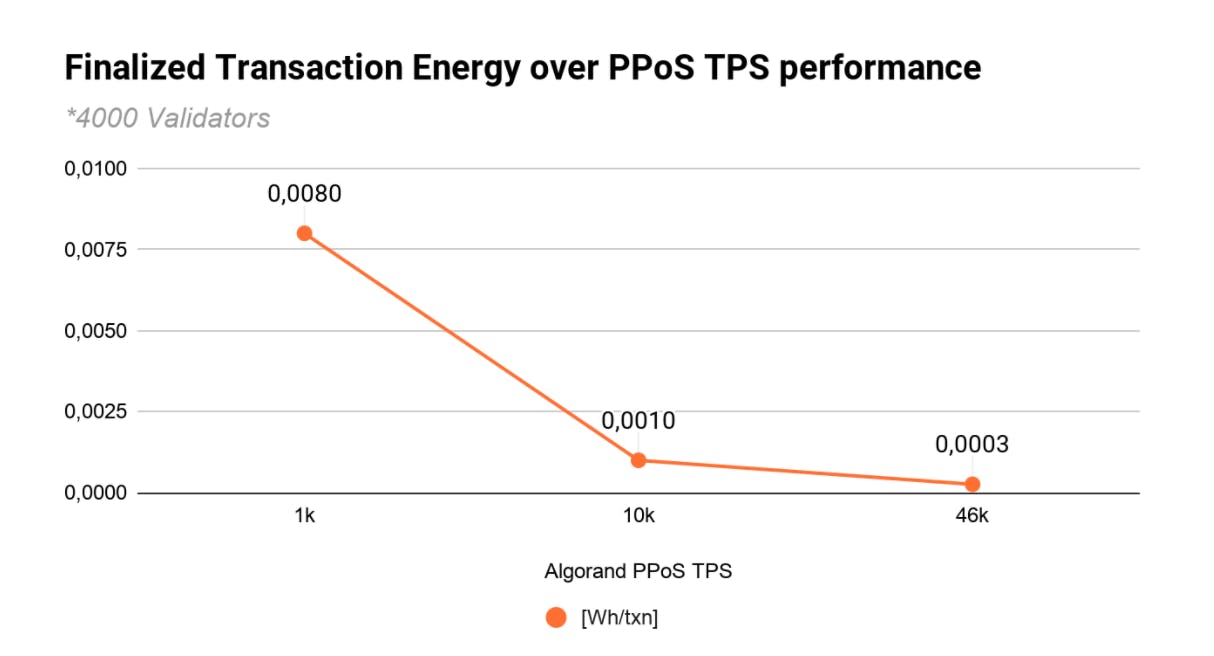 As a final step, the comparison addresses the whole amount of energy spent by different protocols to reach consensus over the next block and keep the blockchain secure, evaluating the overall energy spent by the entire network for the confirmation of a single transaction.

Some data on this metric for Bitcoin and Ethereum (April 2021):

So, presuming full blocks we have:

To point out the implications of PoW huge energy requirements per transaction is worth pointing to two additional considerations. First: since the probability of soft forks is not neglectable in PoW protocols, transactions in Bitcoin are commonly considered “final” only when a 6 blocks depth is reached so that the overall energy requirement for finalized transactions should be considered even higher than a single block confirmation. Second: usually common blockchain applications rely on the interaction of several Smart Contracts, requiring the submission of a set of transactions. Uniswap, a well-known DeFi protocol for automated liquidity provision on Ethereum, requires a set of 35 transactions: this gives an insight on how critical it is to have a very small amount of energy per finalized transaction. 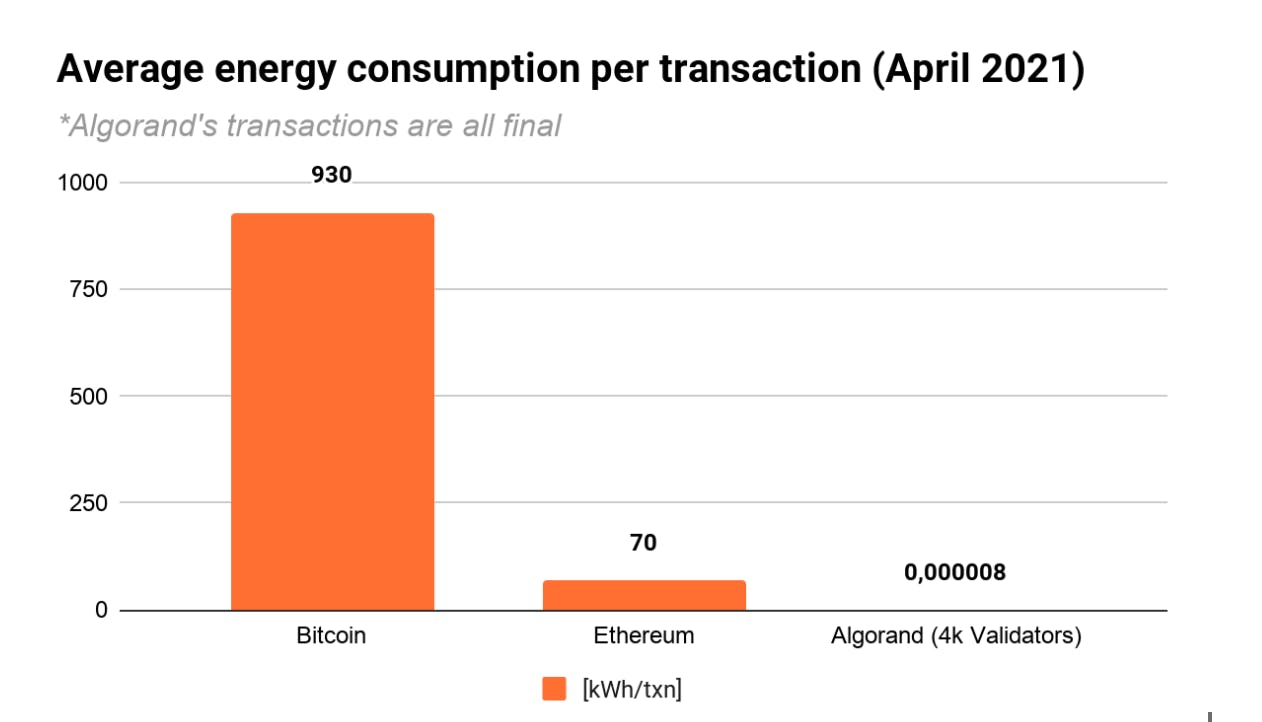 As a conclusion of those estimations, let’s try to answer the following question: “What’s the carbon footprint of NFT minting on Algorand?”, breaking it down into smaller pieces.

That is exactly what we just estimated!

Trying to come up with provable and analytical metrics for a carbon footprint is not that simple, so let’s take the estimation of the amount of energy for a finalized transaction on Algorand and then consider the US average electricity source emissions of 0,50 kg of CO2 per kWh (in Italy this amount would be less than half for example).

*Disclaimer: the results presented in this article should be intended only as a gross estimation of the amount of energy consumed by the Algorand public network for each finalized transaction.

Interested in learning more about Algorand? Let us know how we can help: